Yesterday’s southern softie worries about aches and pains, and about the difficulties of today’s ride, turned out to be nothing more than the worries of a southern softie, and therefore to be discounted. It was a great day—the best yet.

True, there was some climbing. We went up 6673 feet—even more than day 2. This is 1.26 miles; it is the height of 646 London double-decker buses stacked on top of each other (Ian suggested this as a measure); and it is the height of Bâlea Lake, a glacier lake in the Făgăraș Mountains of central Romania.

Rob divided the ride into four climbs, as below.

To make up for the climbing, the ride was pretty short. I forgot to switch my Wahoo on at the beginning of the ride, but the official length was 54.5 miles. It still got us into North Yorkshire and then into Cumbria, though:

Where we are now

In reading what follows, bear in mind that I can’t always match the location of the photo with exactly where we are on the ride, because my camera doesn’t have GPS. But I think my guesses aren’t too bad.

So here is the first climb. That’s Lisa leading the way and Allison behind. The following photo shows what lies ahead.

Looking down the hill… 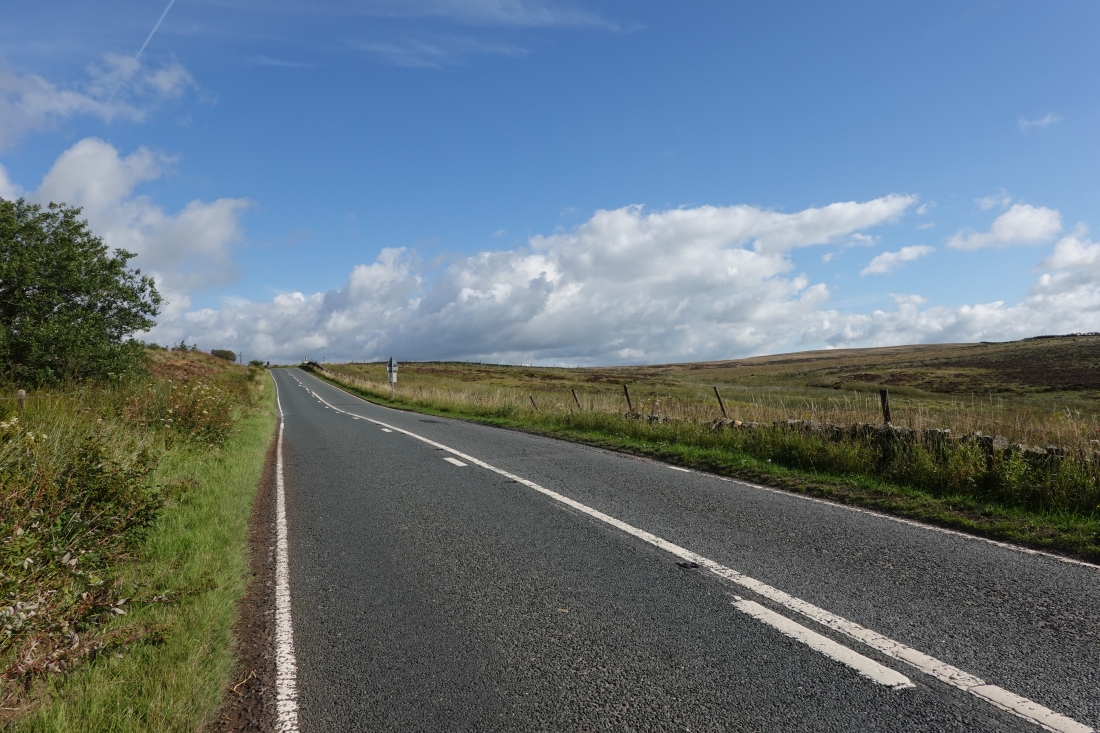 And here’s Justin riding tempo for other members of the team later in the climb: 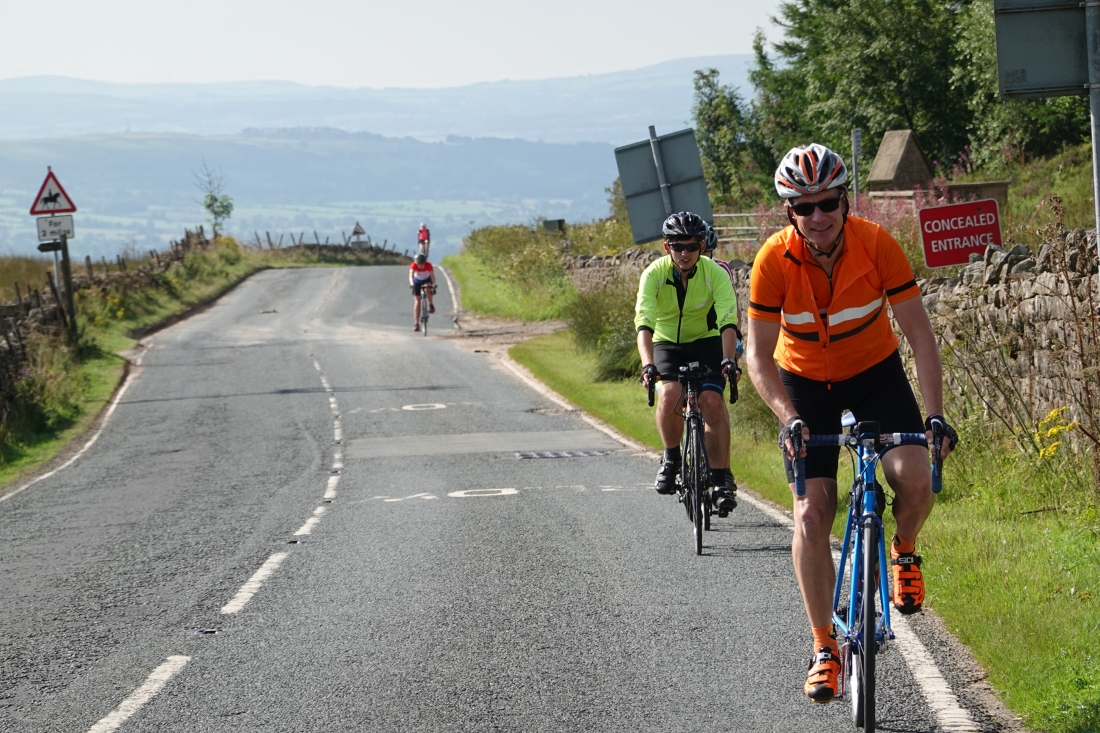 You can see from these photos that the weather was really good. Not too hot for going up the hills, and not too cold when we were able to blast down them.

The descent from the first climb took us to Newton-in-Bowland and then to Slaidburn, and St Andrew’s Church:

I didn’t know it at the time, because I didn’t stop to look inside, but the church is known for its “quantity of good early woodwork”. It struck me that if you were so inclined, a more leisurely ride along the route we are taking would be a wonderful opportunity to inspect churches the length of Britain.

The second climb passed this ruined house (I’ll photograph anything during a climb, in an effort to break the work up into more manageable chunks) and it finished with us meeting Rob at the top. He counted us out of Clitheroe, and he counts us at strategic points during the day’s ride. With him doing this, and Tim playing the role of broom wagon and lanterne rouge, they can be sure that everyone is accounted for and that no one has the opportunity to take the train, should that unworthy thought ever spring to anyone’s mind.

The old house on the hill

Part of the climb 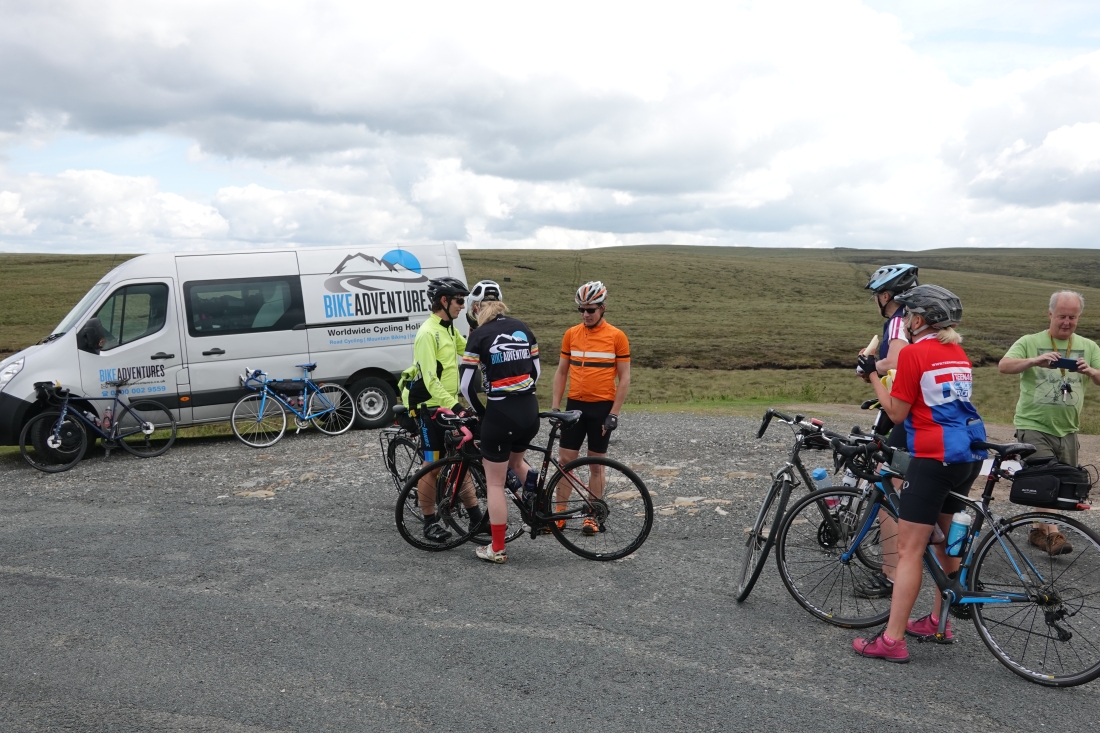 On the very fast way down we saw this building and some sheep.

At about 25 miles we reached Ingleton, where we stopped for a scone and admired this bridge in the distance, before we embarked on climb number three. We also admired the stocks you see below.

About to begin the big effort on climb three

The early part of the descent 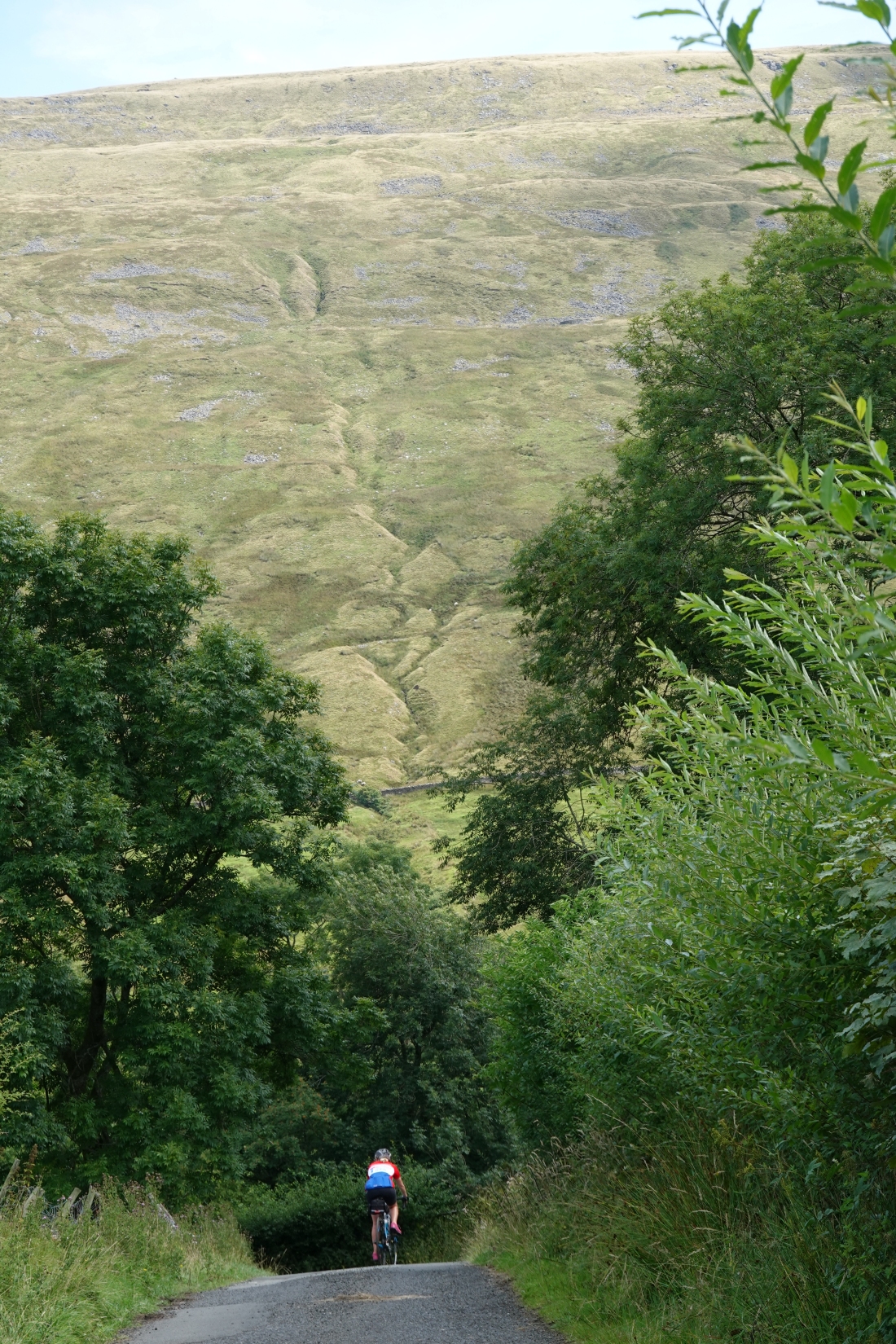 Later in the descent

The descent was very steep and challenging, and we had to open and close some gates on the way. The most exciting bit was the 30% downhill approach to a closed gate, where it was easy to hit 30mph if you weren’t careful, and similarly easy to hit the gate at that speed. We all made it, though, and there was easier stuff further down, where I reached 40mph, according to Wahoo.

Finally, the less said about climb four the better. The ascent from Dent (where I had a ham sandwich) to Dent station was gruelling, and Lisa and I both ended up walking. Oh well! But then the downhill stretch was an opportunity to maintain 30mph for a few miles before we reached the hotel, handed our bikes over to Rob, and finished our brilliant day.

Here are my stats:

Changing the subject to cycle shorts…

I don’t want to tempt fate, but things are going pretty well in the part of me that makes contact with the saddle. Abbie Taylor at Wellcome had suggested I bring with me a packet or three of these, which I did, but I have had no requirement for them yet.

One reason that things are going so well is that I have some excellent cycle shorts: a pair of bib shorts by Assos, and normal shorts made by Pearl Izumi and (the best, these) by Rapha. What makes the shorts so comfortable is their padding, and there is a little story to this.

At the end of my last blog I referred to Van Morrison’s song St Dominic’s Preview, with its opening lines:

Shammy is chamois leather, which was made from the skin of the chamois (Rupicapra rupicapra), a European mountain goat. When I was young, chamois leather had two uses. One was indeed to clean windows, and my father used shammy to clean the windows in our house (everyone cleaned their own windows in those days). Shammy must have been really expensive, because I remember very well how cross he was with me when I somehow lost one of his leathers.

The other use was in cycling shorts, as padding, and shammy was first used for this purpose about a hundred years ago. This was particularly important because cycle shorts were not the tight-fitting lycra or spandex items we know of today, but were made of wool and tended to bunch up and cause friction. The shammy insert must have been a godsend. Nowadays we use synthetic padding, of course, and very good it is too. Men of my age have often been ridiculed for wearing cycle shorts, and described as Middle-aged men in lycra, but I can assure you that the shorts are remarkably comfortable, and after a while you get used to having breakfast with seventeen other people, men and women, similarly attired.