I begin by rectifying an omission. On Day 5 I really should have shown a photo or two of Hopton Castle, which we visited about an hour before arriving at our hotel in Wentnor. It’s a perfect little structure. It was founded in the 12th century as a motte and bailey castle, with a keep (perhaps wooden) built on a raised earthwork called a motte, which was surrounded by a courtyard, or bailey. The stone version of the keep was built in the 1260s. The history is outlined in the Wikipedia article above, and in the castle’s own site here. The castle was an important stronghold for Parliament in the west of England in the English Civil War. In 1644 Hopton Castle was besieged by a Royalist force of about 500, led by Sir Michael Woodhouse. The thirty Roundheads, commanded by Samuel More, eventually surrendered, perhaps following a breach in an unusual garderobe chamber.

I was very impressed by the energy of the Hopton Castle Preservation Trust, and by how much of the history was inferred from work done by a TV archaeology programme called Time Team.

The keep of Hopton Castle 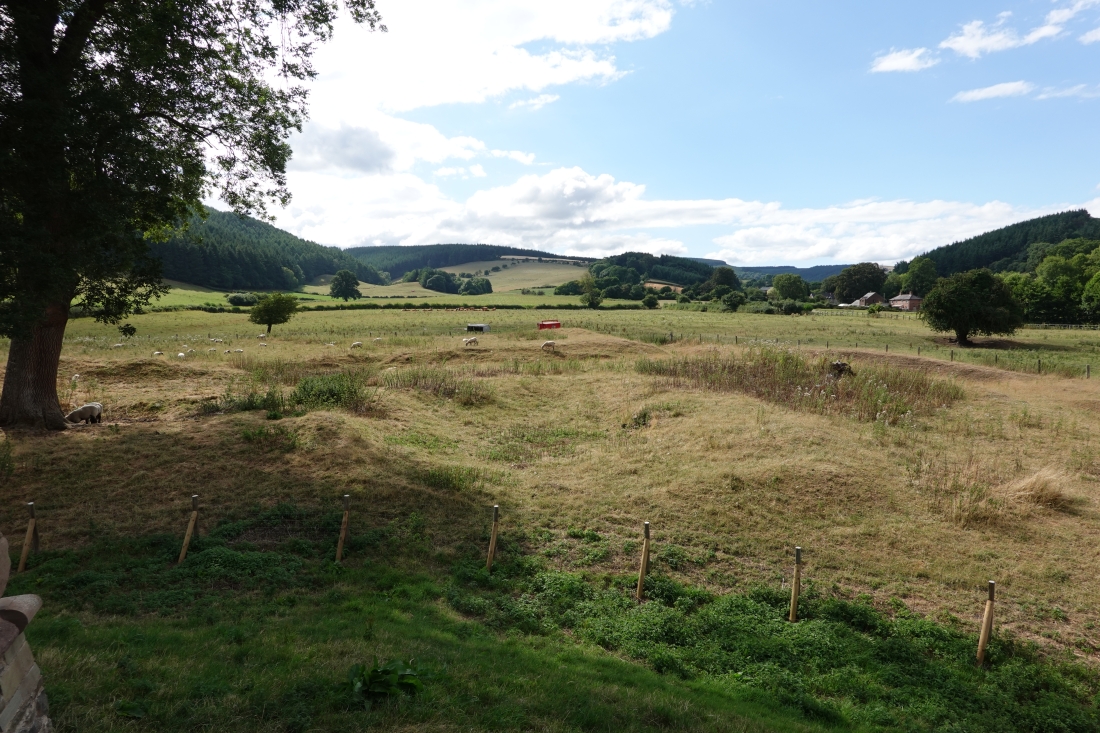 The remains of the bailey

The plan for today was to get to Clitheroe, a name I am most familar with from listening to The Clitheroe Kid, a radio programme that I think was broadcast on Sunday lunchtimes, before or after Round the Horne. My dad loved both, and they were required listening for our family. The Clitheroe Kid was quite funny all those years ago, but I don’t think it quite holds up now. See what you think of this example.

The day wasn’t meant to be too taxing, but the weather was changeable and I was beginning to feel a few aches and pains. My right shoulder hurt, making it harder to look behind me as I was cycling; as a result I would veer wildly to my right whenever I checked the traffic. My knees (especially my left knee) were beginning to give me some pain, especially uphill. I tried to decide whether it was better to have fewer pedal revolutions, by using a higher gear, or less exertion per pedal stroke, by using a lower gear. I went for the latter. And then a bloody bee stung me through my shorts, in the back of my left leg. Ouch.

Oh well. It was never supposed to be easy.

Two-and-a-half miles after setting off we went through the attractive village of Comberbach, where they have converted a phone booth into a mini library:

And it wasn’t long before we crossed the M6.

At 13 miles we reached the Manchester Ship Canal, a 36-mile waterway which links Manchester with the Irish Sea. Construction began in 1887, and it took six years to complete; that sounds pretty quick to me. I had always thought the canal would be pretty industrial all along its length, but not a bit of it. The first photo below shows me taking my life in my hands by standing in the middle of the bridge to take a picture. The second shows the view from the bridge. 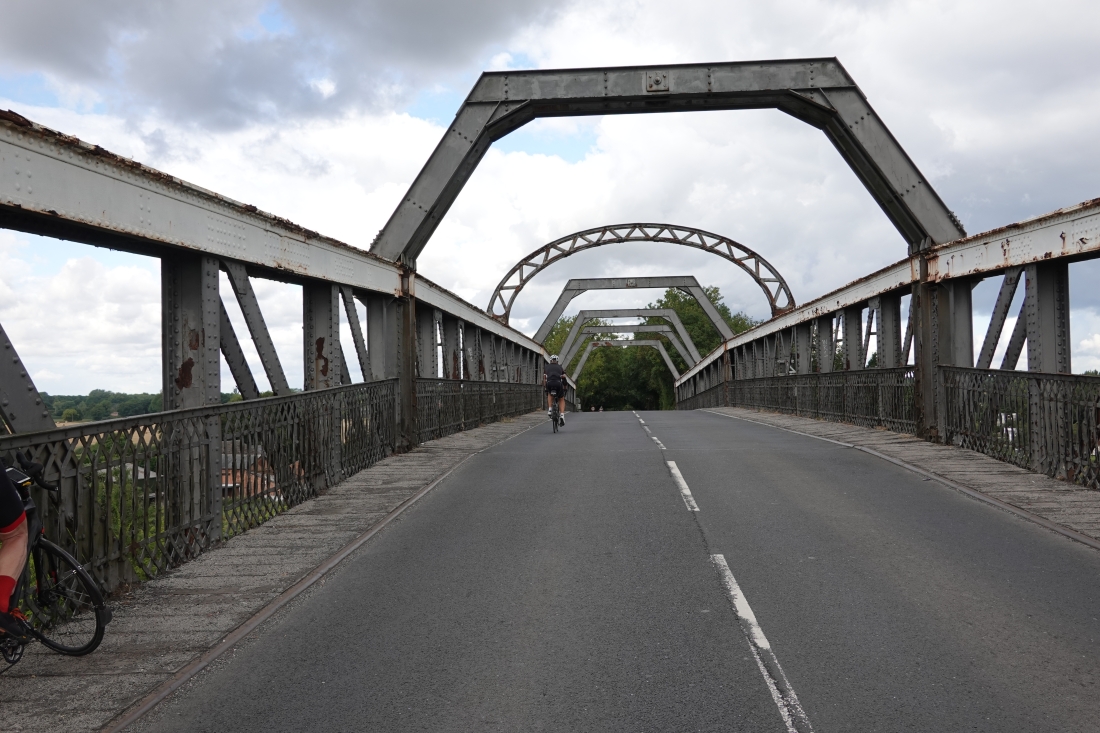 The bridge over the Manchester Ship Canal 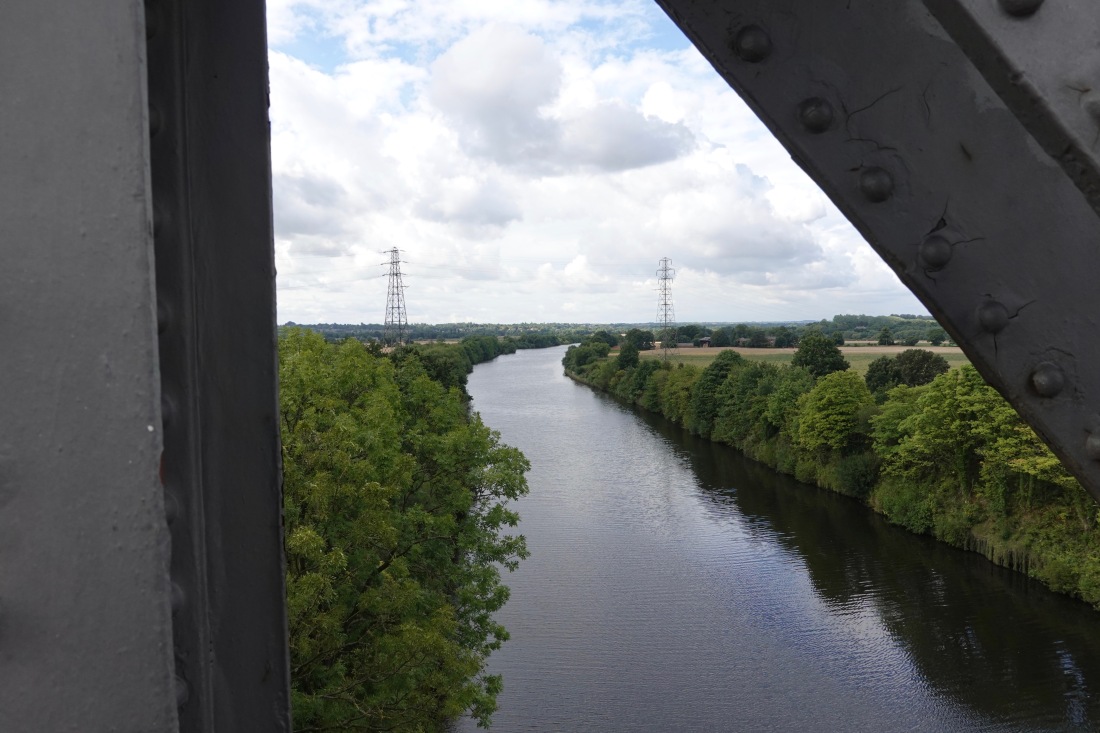 The view from the bridge

Refuelling is (as I have said before) very important, and we all joined Rob at a café in Glazebury for coffee, tea and cake. Here is a photo of me, with Allison in the background. I was wearing a jacket at this point, so it was getting pretty cold.

And here is Father Paul, taking some photos for his own blog. Those are The Whippets in the background.

On we go—through Hindley and a road to Wigan Pier (probably not the road…).

A road to Wigan Pier

Lunch was in Rivington. A cheese and ham toastie and a diet Pepsi, and then back on the road again. It kept changing its mind as to whether it was going to rain—when it wasn’t raining the countryside looked pretty good.

We crossed the M65 near Blackburn, and the tiny sign that you can’t read below says Ewood Park, the home of Blackburn Rovers Football Club. They play Millwall tomorrow in their opening game of the Championship. With Blackburn in mind, I am cross with myself for not taking a photograph of a hole, so that I could make a joke about the Beatles song A Day in the Life. Maybe next time.

Then it was across the River Ribble for the first time. The river was beautiful but I was too tired to take any photos. (I confess that I had only heard of the river because I know of Ribble Cycles, who make really good, and good value, road bikes.) But as we came into Clitheroe we crossed the Ribble again, and I was able to get a photo after all.

The Ribble, near Clitheroe

I got to the hotel at about 4:15, and having described my routine yesterday, I immediately diverted from it. I cleaned my bike, so that it looks shiny and fairly new. Then I showered and washed my kit, but instead of writing this blog I went out to buy some ibuprofen gel and tablets for my shoulder and knee, and some anti-histamine for my insect sting. And also some DEET for the midges in Scotland in a few days. Only then did I rest, eat, and, now, write. And in a minute, I’ll go to sleep!

Here are my stats, our route for the day, and our overall progress. We are getting closer!

Looking at this map reminds me that Lisa and I were discussing today the familiar Mercator projection and the Gall-Peters projection, and how much of our ride is in England and Wales and how much in Scotland. More on this later.

Tomorrow is a very tough day. Wish us luck!