We are on the home straight now. Here is what we did today (in red), with our next destinations marked: Alness, Bettyhill and John O’Groats. A casual glance would suggest that tomorrow is a long ride, and the casual glance would be correct. It’ll be our longest yet, at 84 miles with 4209 feet of climbing. Friday and Saturday come in at 74 and 58 miles respectively. Today was another wet day, but not as bad as Tuesday. It started with a long cold climb (see profile below), but I am getting used to long cold climbs now, so I wasn’t phased, especially because the descent was pretty fast and fun. At first the route took us along the banks of Loch Awe, and the views were as wonderful as always, if you like moody images of clouds hanging over the tops of hills and mountains.

The profile of today’s ride 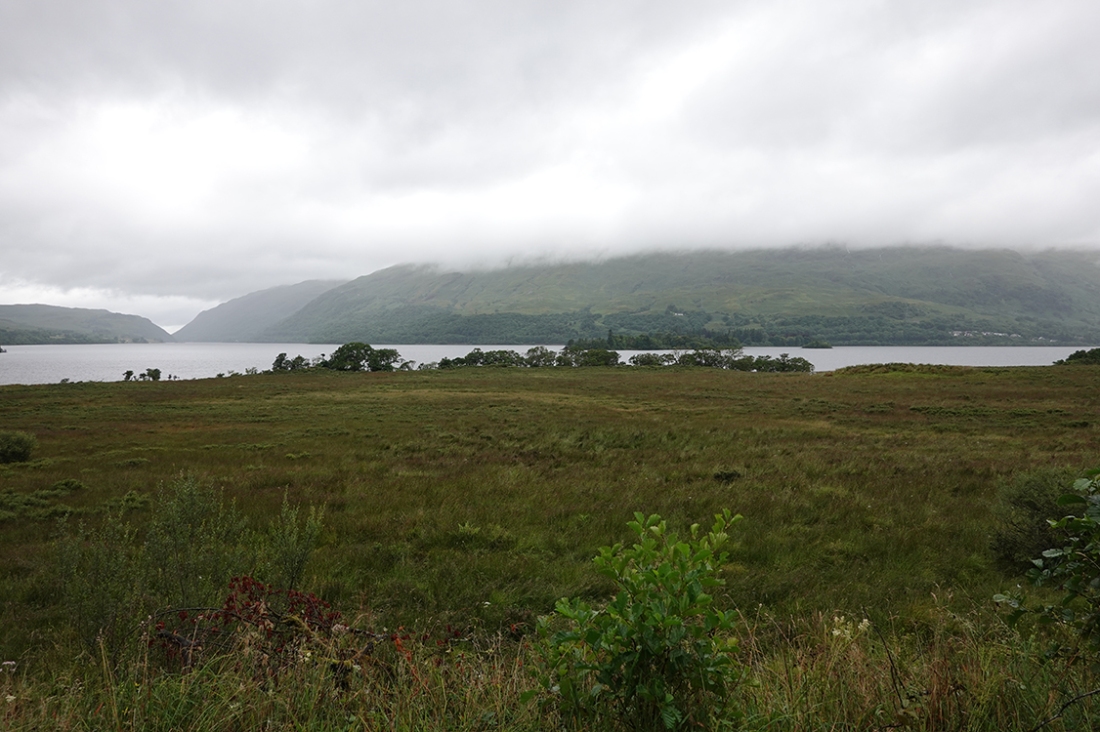 A moody view over Loch Awe

As I went round the head of the loch (I was riding alone today) I crossed the famous Bridge of Awe. The original bridge, completed in 1779, was destroyed in floods in 1992, and I rode over the concrete replacement, built in 1938. It was a sad day when the old bridge was lost. I understand from Wikipedia that it featured in the 1959 film The Bridal Path with George (‘Minder’) Cole and Gordon (‘too many films to mention’) Jackson. Actually, I will mention some of Gordon Jackson’s films and TV appearances, because they were so great. His films included Whisky Galore, The Navy Lark, Mutiny on the Bounty, The Great Escape, The Ipcress File, Those Magnificent Men in their Flying Machines and The Prime of Miss Jean Brodie; his TV work included Upstairs Downstairs and The Professionals. Here is a photo from the 1938 bridge. 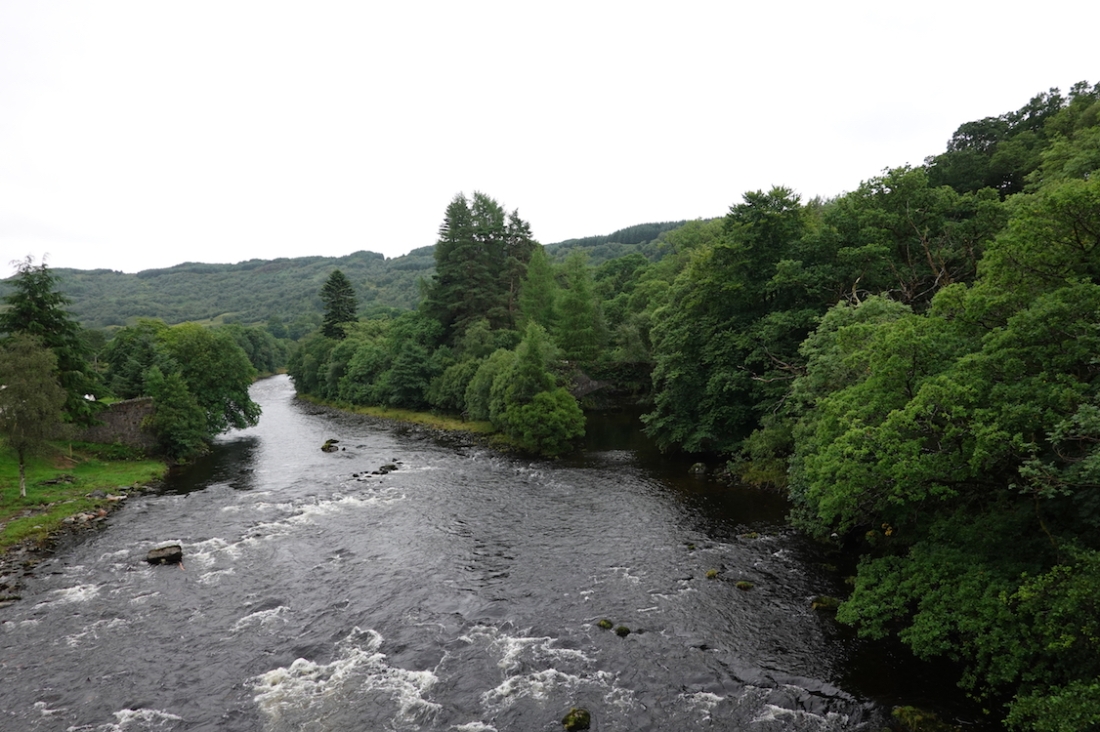 From the bridge of Awe

As I went on, I reached Connel, where we had a family holiday two years ago. We stayed in one of the cottages on the right-hand-side, looking over the estuary. 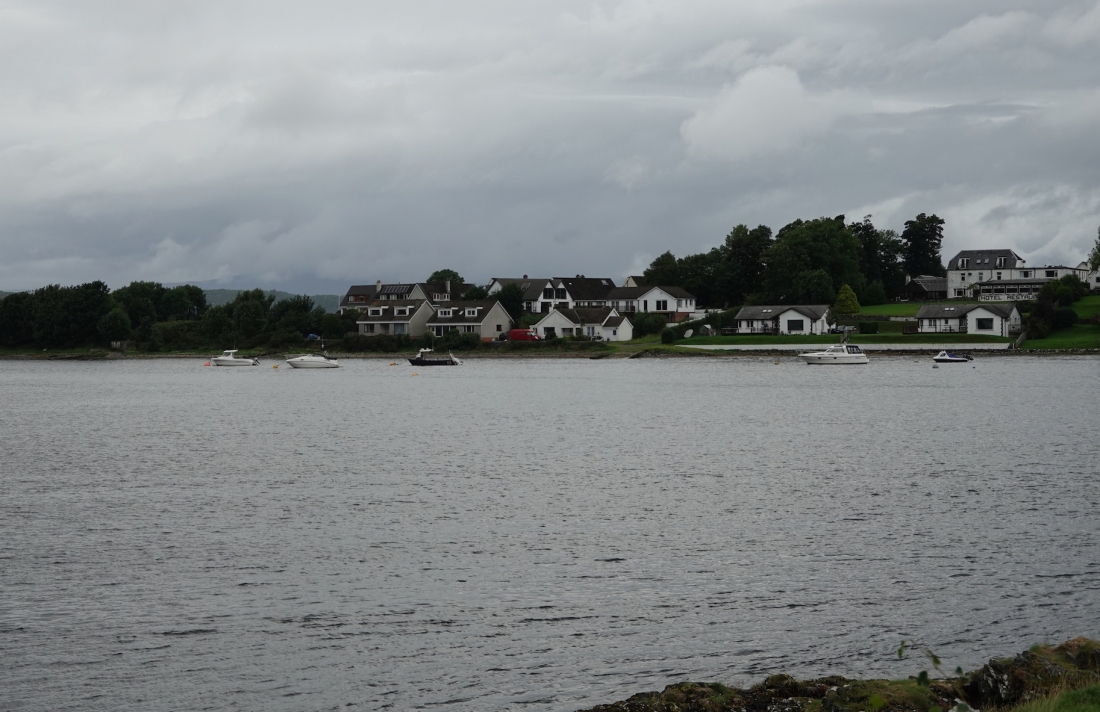 It was pretty gloomy today, but the photos below, from 2016, show that the sun does shine sometimes. 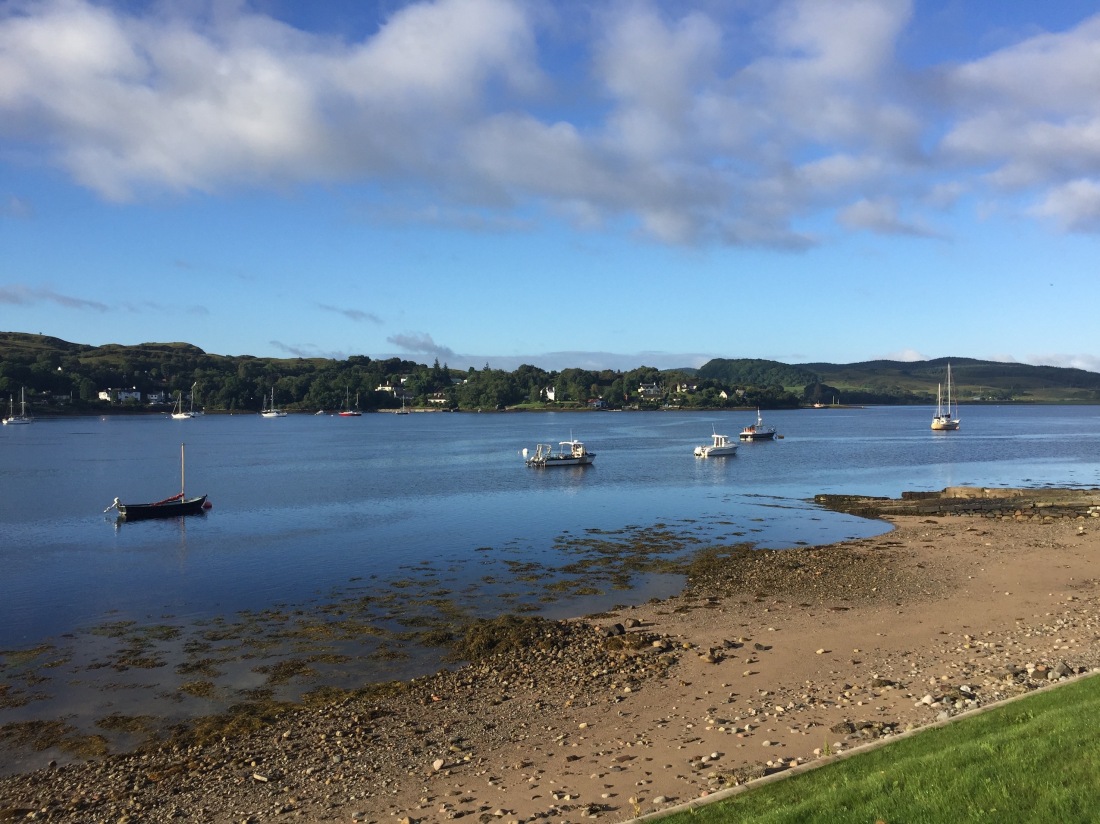 A view from the cottage

I met fellow cyclist Jack here; he was hurrying to get to Fort William before 17:00, when the bike shop closed. The hub on his rear wheel was giving him serious trouble and I think he’ll have to get a complete new wheel. I’ll find out at breakfast tomorrow.

From this point I was following Sustrans Route 78, the Caledonia Way. Sustrans do a great job—everyone should support them. Here is a typical view of the cycle path. It’s such a good way to see parts of the country you’d never otherwise see. 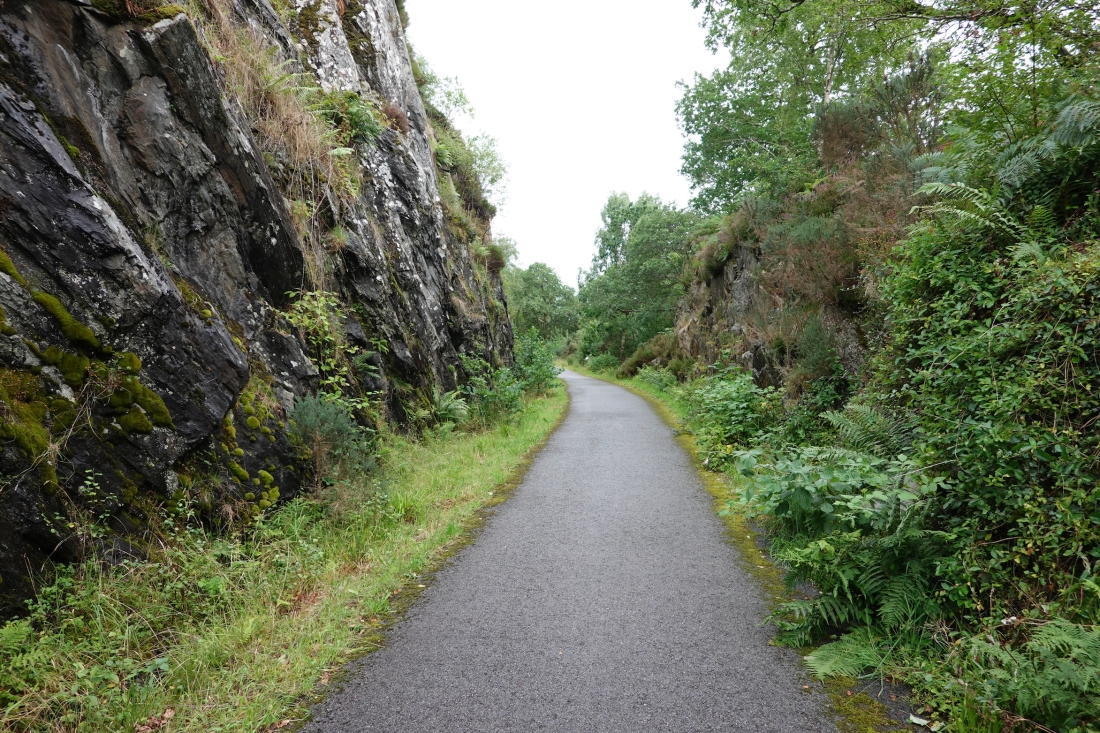 I soon reached Appin, and the remnants of its railway station, a victim of the Beeching cuts. 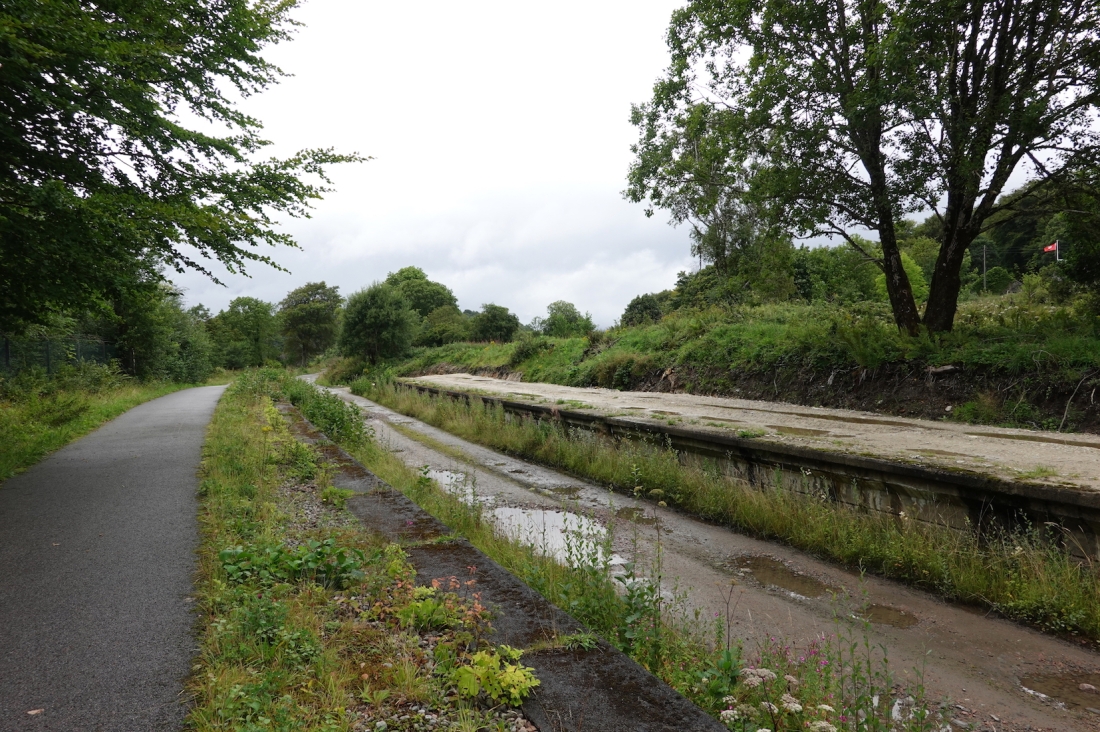 Appin used to have a railway station

But the great thing about Appin is Castle Stalker, known to Monty Python fans as the Castle of Aaargh. You just can’t take a bad photo of Castle Stalker (well, you can…). Here it is with a wide-angle lens and then zoomed in. 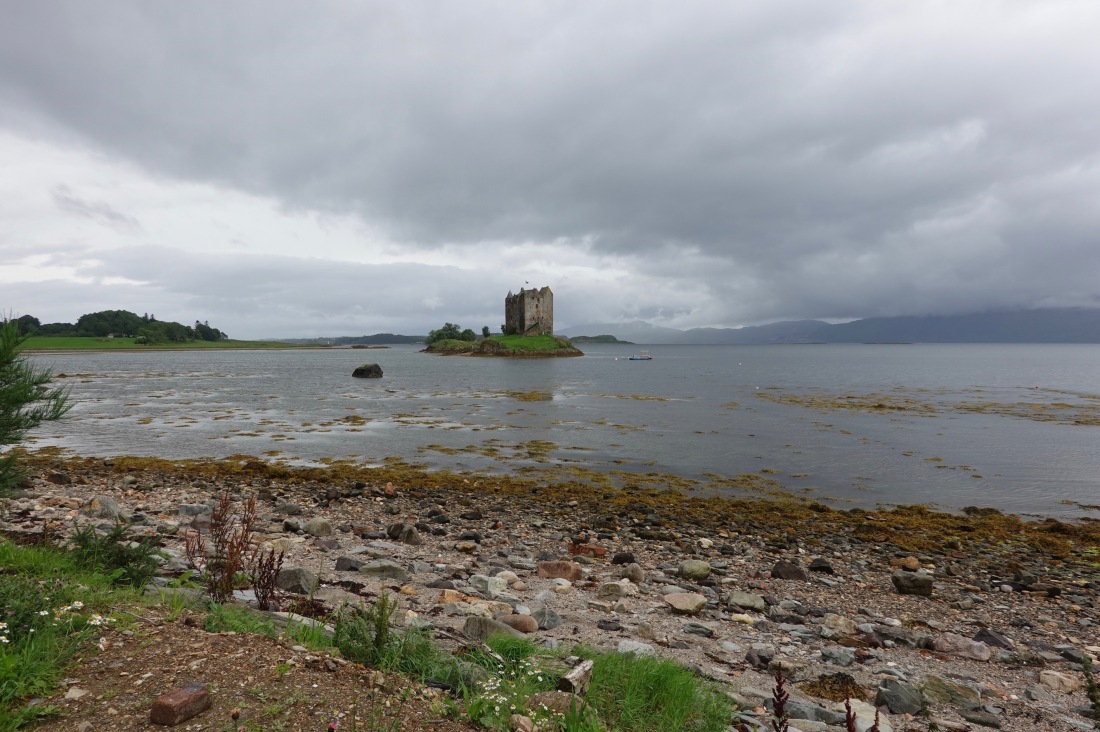 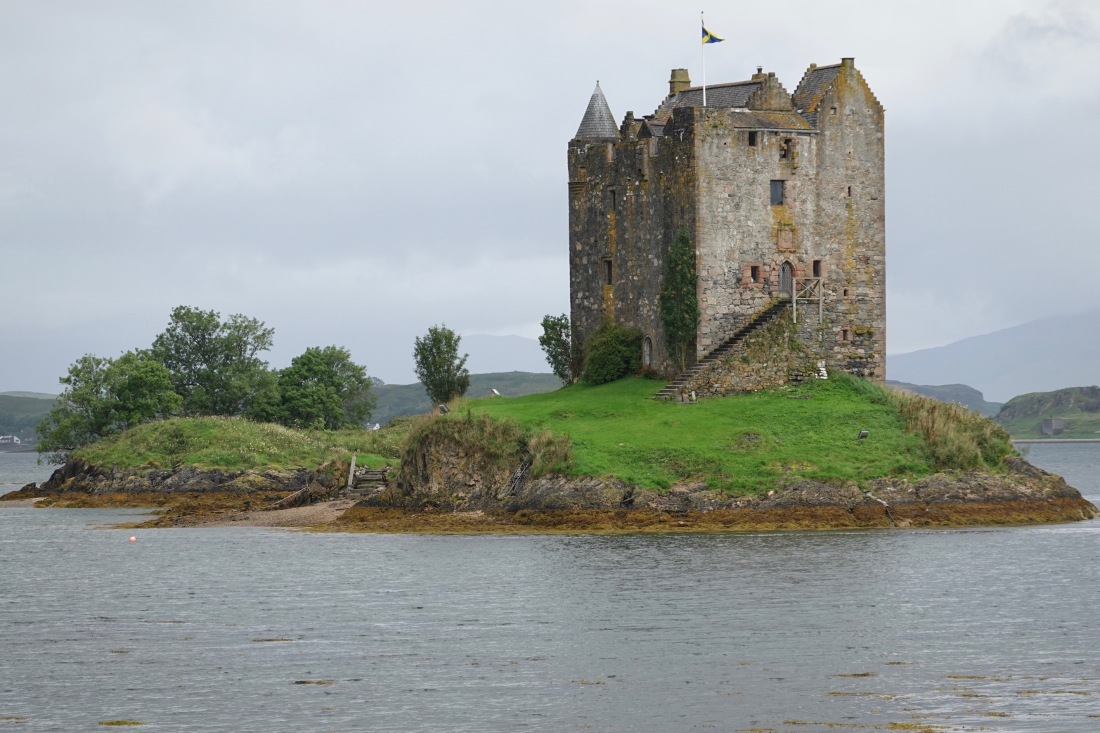 The weather was getting grim again, so I took one more moody shot of clouds over hills, and with 25 miles to go I put the hammer down/dug deep into the suitcase of courage/got on the rivet/went as fast as I could (choose your own description) to get to Fort William. 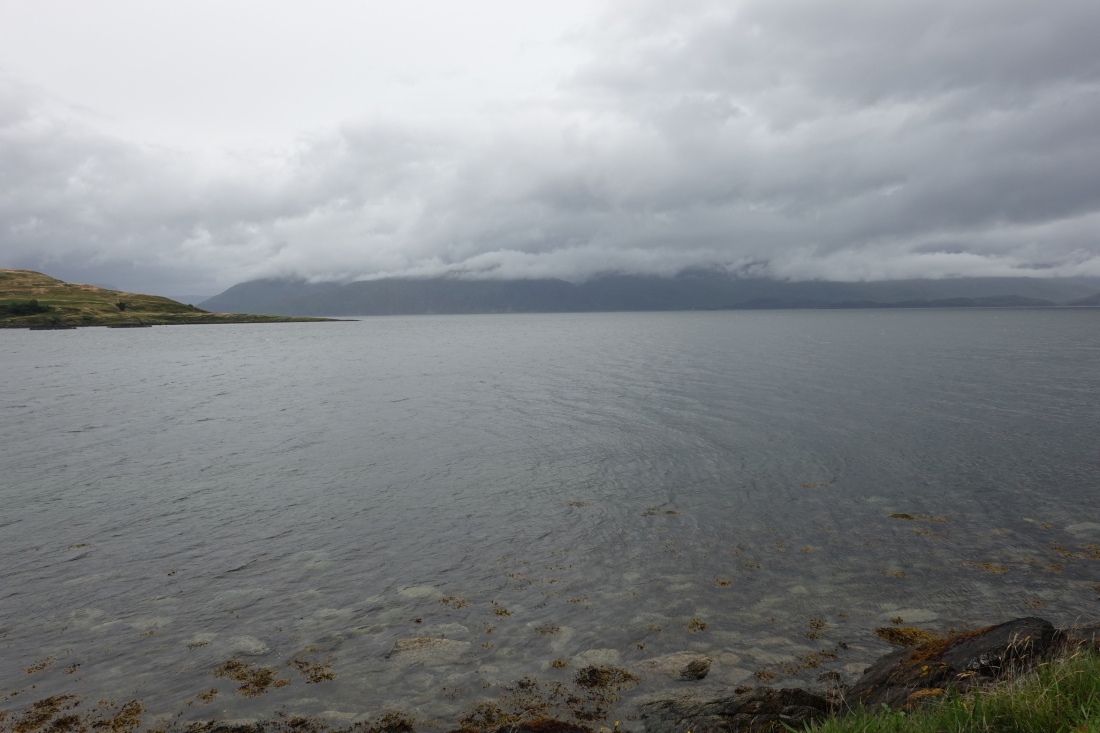 Most of the ride was on the Sustrans route, and very nice it was too, but there were a few points where I felt distinctly uncomfortable. The first was crossing a road bridge—I have no idea where it was because I was going so fast (for me) and because I was concentrating so hard on the road immediately ahead. The cycle path was narrow enough that a wobble to my left would have taken me into the path of oncoming traffic, and a wobble to the right would have brought me very close to the edge of the bridge and a watery grave. The path was similarly narrow at other points on the way to Fort William, and it was all a bit scary.

Not as scary as when the cycle path ran out, however, and we were sharing a narrow two-lane road with lorries and trucks and fast cars. My tactic was to try to minimise the difference in velocity between me and the cars by going as fast as I could, but it really wouldn’t have mattered if I had been doing 10 mph or 25 mph; being hit by a lorry doing 60 mph would have been curtains.

Anyway, I made it early into Fort William, and went immediately to the bike shop. Waterproof over-shoes, a helmet light that flashes to front and rear, and some gels and energy bars to see me through the next few days. Fort William is an interesting place—it’s clearly the hiking centre of Scotland, if attire is anything to go by. If you’re not in Jack Wolfskin or North Face, you’re in Berghaus or Craghopper.

And now, as soon as I post my stats, I’m off to see what food it can offer.