I’m not going to make a habit of this etymology thing, but Motherwell does not refer to your mum’s state of health, but to a well originally dedicated to the Virgin Mary.

Our cycling party was split into two last night, and I was fortunate to be placed in the rather fancy country house hotel. My room was spacious and had a huge sofa, a desk, and everything I needed (except decent wifi, so I couldn’t finish writing this, or post it, until now). The staff were helpful, and when we arrived they gave me and Nigel a bucket and some cloths to clean our bikes (I am very bike-proud). Here is the hotel and my bike shortly before departure:

The morning was overcast, and the first part of the ride headed north (obviously) towards Moffat, passing close to Lockerbie, one of those names like Hither Green that for my generation will always sound sad. There were lots of cows and sheep in the fields as we cycled along. (What a boring sentence. It belongs in a beginner’s English-as-a-foreign-language text-book. Nevertheless, there were plenty of cows and sheep, and to be honest there wasn’t much else to look at for a while.) 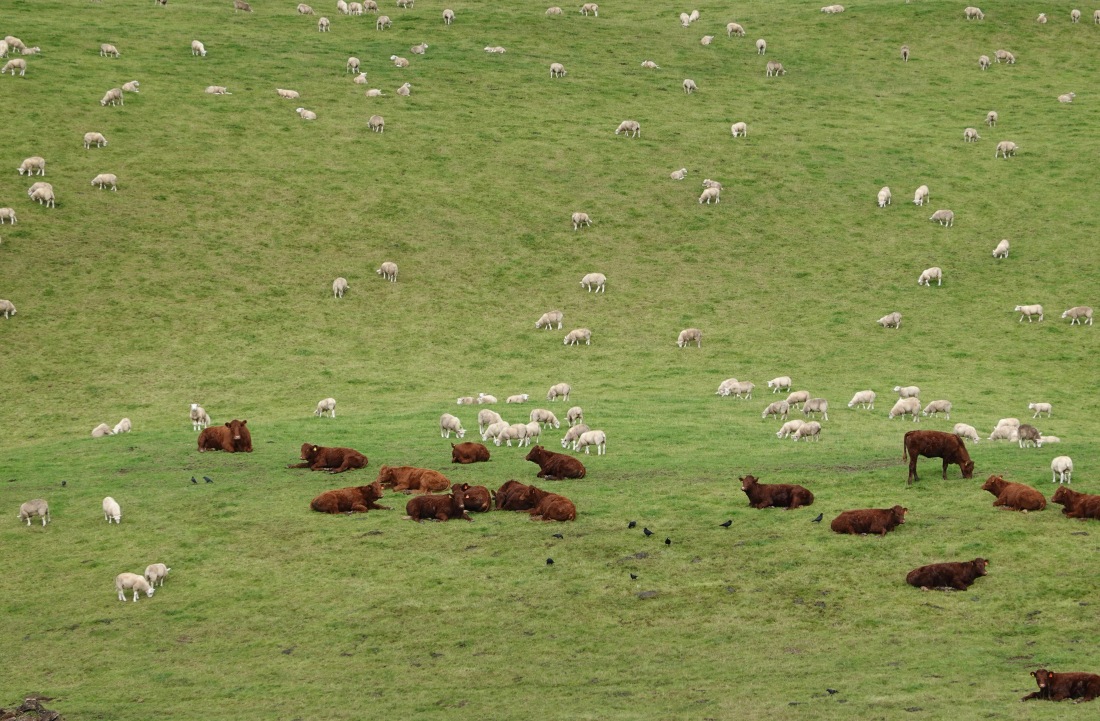 Close-up of the same cows and sheep

And the clouds were low over the hills.

As I cycled into Moffat I came across Father Paul, who was trying to get his bike working. He had a bad case of road-rash, and it turned out that he had had a disagreement with a car. I didn’t get the full story, but it involved Paul, who is used to cycling in America, veering the wrong way when he met a car in the middle of the road—that is, he steered towards the car rather than away from it.

The axle of the rear wheel of Father Paul’s bike had been dislodged from the drop-outs and wedged between the chain stays, so the wheel didn’t turn. I managed to fix this, but I wasn’t able to fix his pedal and cleats, so he limped into Moffat where Rob took him to a bike shop and as well as selling him new shoes, pedals and cleats, they cleaned up his wounds—yesterday’s as well as today’s. That’s what I call service.

After Moffat we had the climb of the day, from about 22 to 27 miles, and after that it was a slight downhill gradient all the way to our hotel. You can see the climb in the profile below.

This was my kind of climb. No more than 5%, so I could just sit in the lowest, or next-to-lowest gear and just keep going. Here is a view on the way up (I love the way clouds hang over the hills) and another one from the top. If you looked carefully, you could see someone had dumped a car at the bottom of the valley. 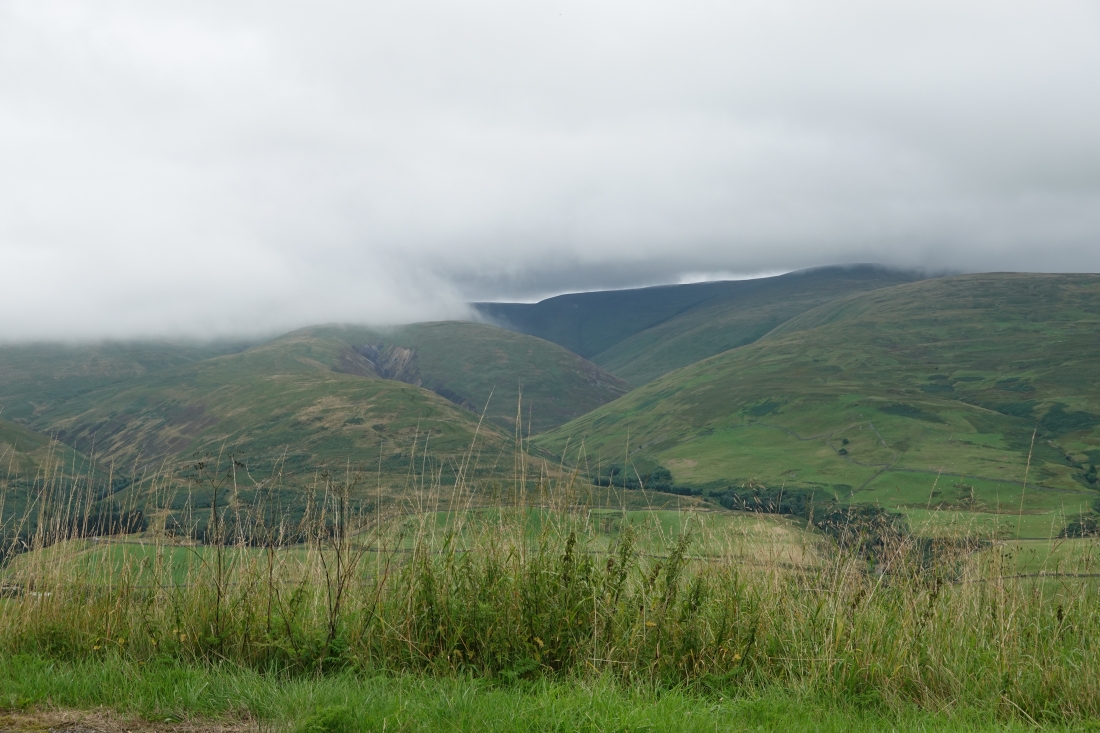 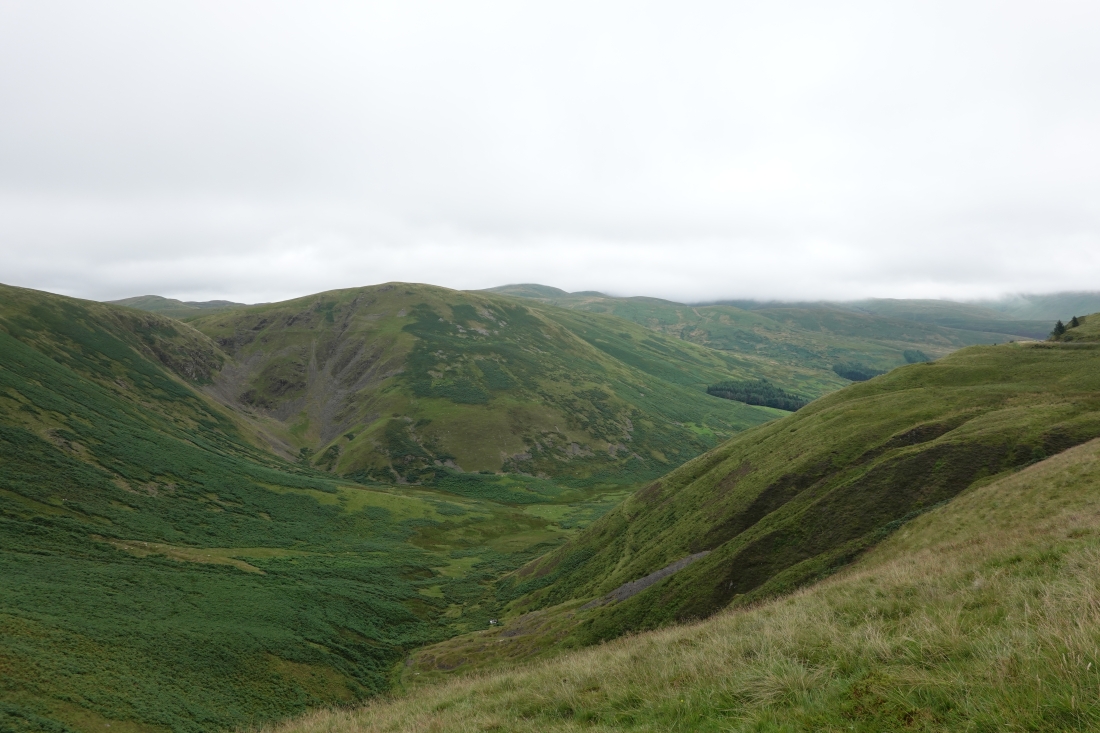 I should have put this on webuyanycar.com

And then we entered the Borders, on a downhill run which would have been more fun if the wind hadn’t been against us. I reached Broughton for lunch at about 1:00pm, and met up with Allison and Lisa. A quick Diet Coke and a sausage sandwich, and we were off—38.5 miles to Motherwell.

In the cycling vernacular, we put the hammer down for this part of the ride, so not many photos. We saw a bull in a field, our passage was interrupted briefly by some cows (again), and as we cycled into Strathclyde Country Park, where we are staying, we saw a nice view from a bridge.

A bull in a field

Some cows, having just got out of our way

A view from a bridge

We checked in, and I had my first dinner at a Carvery. It cost £5.95 for virtually all you can eat. And on which subject…

I have to admit that I was hoping to lose a couple of pounds during this ride, so that I could fit a little more easily into my dinner suit. But how many calories do you use when you cycle? Might I realistically expect to lose some weight? Simple questions, complicated answers.

I first turned to Strava, the app that records every detail of your ride, and you can look at today’s ride here. You’ll see that we did 84.27 miles, and climbed 4062 feet. By most people’s standards this is quite a long bike ride, but Strava tells me that I consumed only 625 calories. That’s the equivalent of fewer than seven Milk Chocolate Hobnobs, or two-and-a-half Mars Bars, and I can assure you that to make sure I get through the ride I’m consuming much more than that—just at breakfast!

My anxieties were reinforced by Rob, who said (at lunchtime, of all times) that most riders return home a couple of pounds heavier.

But people who know better than I have been more reassuring. Ellie, a very experienced cyclist, works on the basis of 500 calories per hour. I don’t cycle as hard as Ellie, but on the other hand I am heavier, so my figure can’t be terribly different from hers. This would give a figure of 3200 calories for today’s ride of 6 hours 25 minutes. Even I cannot add the equivalent of 35 Chocolate Hobnobs or 14 Mars Bars on top of my usual diet, so on this basis I would lose some weight.

In addition, Matthew Freeman gave me a link on Twitter to an article in Cycling Weekly (as opposed to cycling weakly, which is what I do). This says that someone cycling at 13 mph (which I was) and weighing 75 kg (which is  a few kg more than I am) uses 600 calories per hour, so this is similar to Ellie’s estimate, and I think I can feel reasssured. Of course, as the article points out, the actual figure will depend upon aerodynamics and wind resistance, the width of your tyres, the road surface, and so on. I suspect it also depends on temperature—if it’s cold outside you’ll need to use energy to keep warm.

So which is right? Everyone I have spoken to says that Strava’s numbers are too low, but Strava know my gender, age, weight, height, resting heart rate and so on; they also know my cycling speed at any point, the gradient I’m climbing, and my heart rate. Can they really get it so wrong? We’ll have to see if that suit fits when I get back.

Having mentioned wind resistance, I should mention that we discussed one more thing over dinner—the vexed question of shaving one’s legs. The serious cyclists in our group all shave (or wax, in one case—no one electrolyses, or will admit to doing so). But why do they do it? Everyone was adamant that it has nothing to do with aerodynamics. Rather, there was a view that if you have a massage after a race, then the hairless appendage is easier to pummel. As an additional advantage, if you take a tumble, like Father Paul, it is easier to remove grit from a smooth leg than from a hairy leg. There is a third reason, of course, which is that people think it looks good, and I suspect this is the main reason most people do it. I did ask one of the Whippets how far up he shaved—was it to just above the shorts line, or did he adopt the cyclists’ version of the Brazilian? There is no need to record the answer.

Finally, I’m not convinced about the aerodynamics answer—I think shaving might well make a difference, and I propose to test the idea by shaving just one leg. My theory is that I’d then tend to cycle to my left or my right, depending on which leg I shaved. A bit like the way James Anderson swings a cricket ball. I’m sure it’s an experiment worth doing.

You can see my stats on the Strava link above, but for the record…

How far we have got. I can imagine we’ll get to JOG some time!