I am writing this on the train home from Inverness, and there are two things I have not said until now for fear of tempting fate (I know this is not a very scientific approach to life, but it is a little-known fact that scientists are also human beings).

The first is that my bike has been brilliant. Others have had problems great and small, from punctures to pedals to spokes to cassettes and to derailleurs. My new Mason has been faultless, and I have not had a single puncture with my tubeless Schwalbe Pro One tyres.

The other concerns that part of my anatomy that contacts the saddle. The combination of my Brooks saddle and the frequent and liberal application of Assos chamois crème has, I am sure, made all the difference. I have used Brooks saddles for many years, but this is my first foray into chamois crème, and I am grateful from the bottom of my…well, bottom…to the person who gave me a tub. 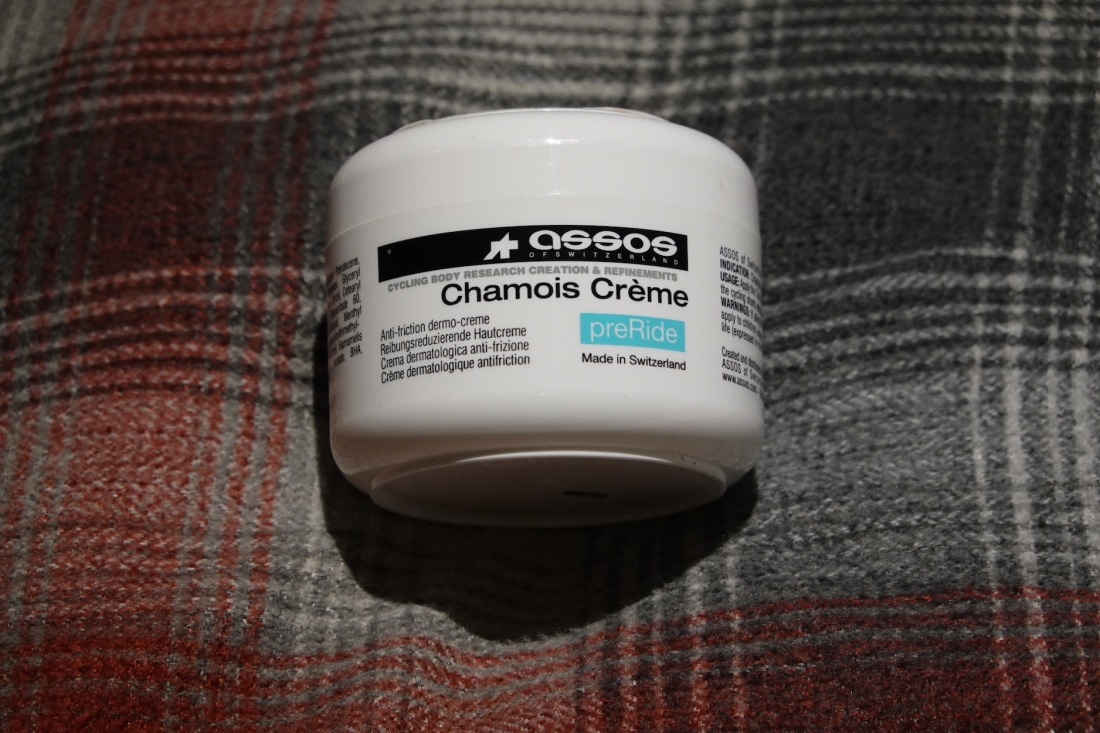 The first thing we all noticed when we woke up was the wind. It was strong and, to our relief, it was blowing from west to east. I can’t imagine how much more difficult our final day would have been had we been cycling into the wind rather than having it at our backs.

Our bikes had been held secure for the night in one of those containers that go on big ships, and it may have been that they were packed a little too snugly, because Andrew had a broken spoke, and Nigel B a recurrent puncture (as soon as you repaired it, it blew again). I didn’t realise this, and set off first, assuming everyone would follow in short order. Here is a photo taken as I climbed out of Bettyhill.

As I cycled I got talking to George, who was doing the North Coast 500, and who had bivouacked overnight. In this weather, rather him than me.

I began to get suspicious that no one was following me when I was held up by a herd of cows coming down the hill in front of me. The farmer made it very clear that these animals were frisky, and that on no account should I try to speed past them. I moved to the grass by the side of the road, but rather than acknowledge my politeness with a grave raise of the hand, as do (some) motorists, they continued to bear down on me. 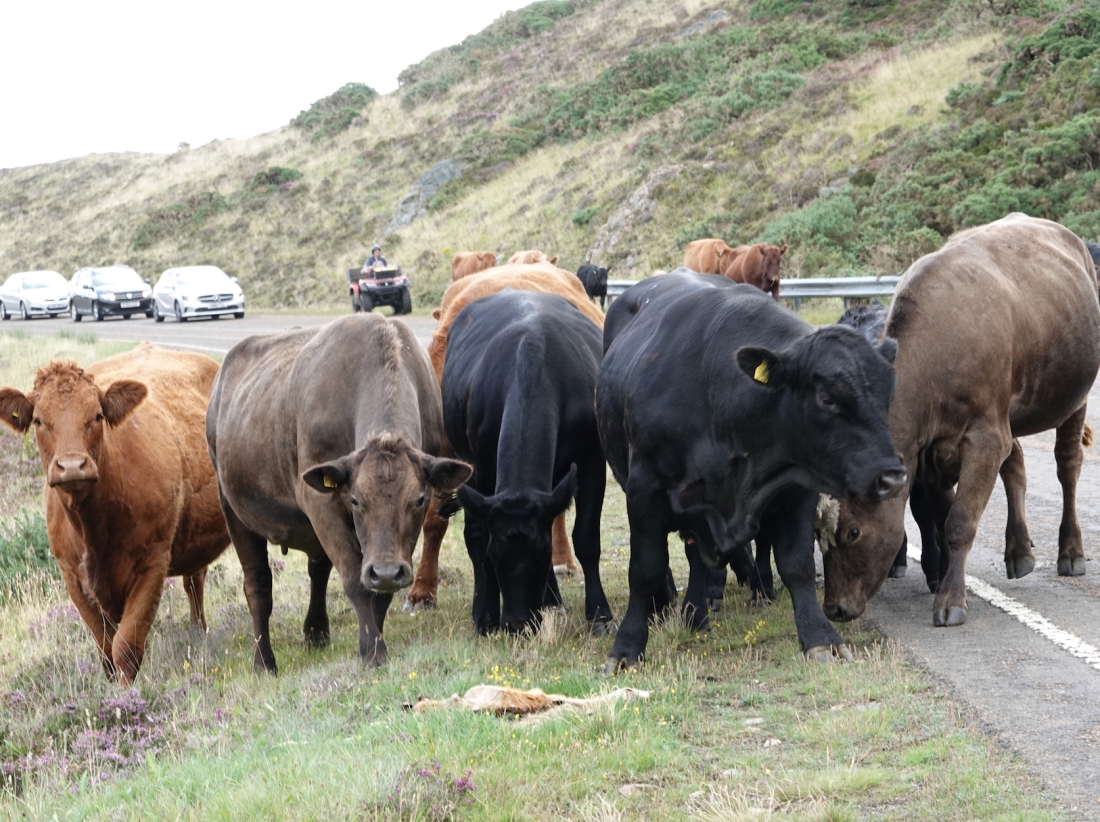 Are you looking for trouble?

Rather than go further down the valley to my left, I toughed it out, and eventually the animals saw sense and returned to the road. Some of them were pretty big! 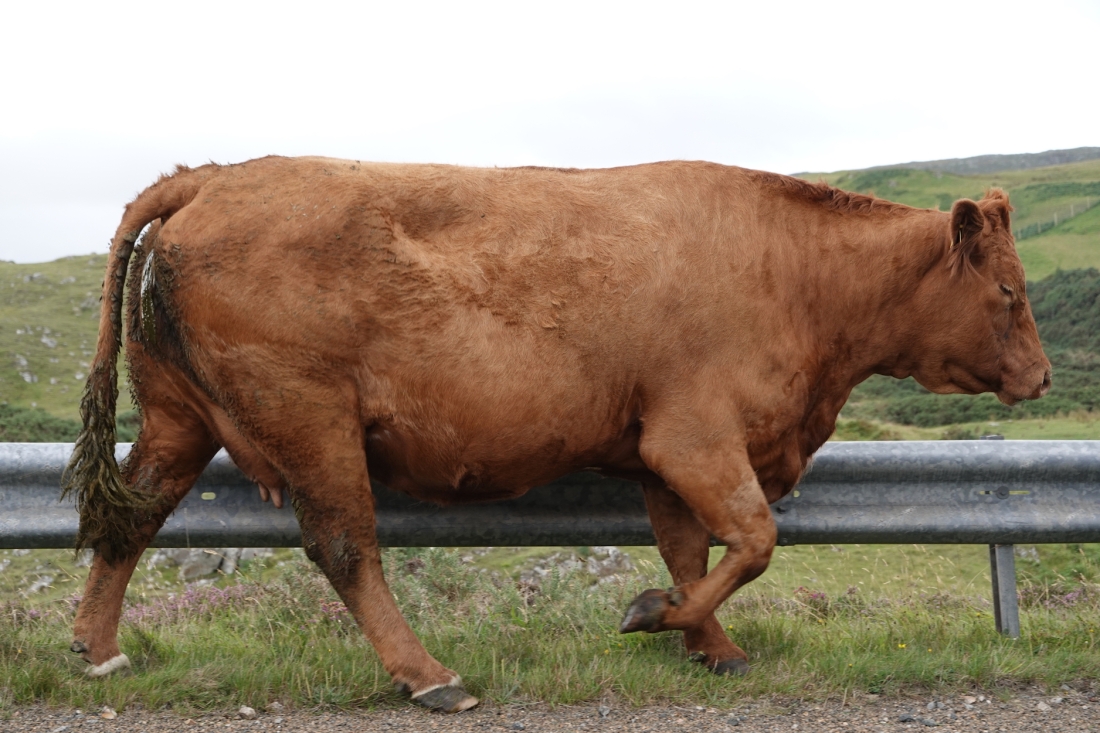 To my surprise, no one had caught me during this hold-up, but I carried on anyway, past the Dounreay nuclear power station, now long decommissioned and in the course of being cleaned up and demolished.

I would be letting the side down as a blogger with an eye for the ironic if I didn’t also show a photo of the nearby wind farm.

Eventually, at Thurso (at about 30 out of 58 miles), Rob caught me in his van. His hands were covered in grease and oil, and he summarised Andrew’s and Nigel’s woes. If we were all to arrive in John O’Groats at about the same time, it would be sensible for me to take a break! So Rob and I headed for the Café Tempest where I had a cheese scone and a coffee, and quite soon along came Max and Andrew (he of the broken spoke). Rob offered to have another go at Andrew’s spoke, but he was frustrated by not having a spare nipple and by not having a spare spoke of the right length. Even when he just tried swapping wheels, the spare could only hold ten cogs, and Andrew’s bike ran on eleven (or it may have been the other way round).

Nigel B, meanwhile, he of the recurrent puncture, was in better shape, because Rob had lent him his own bike.

While Rob and Andrew tried to fix Andrew’s wheel, Max and I set off for Dunnet Head—we had agreed that most of us would make a short detour to visit this most northerly point in mainland UK, and if Andrew were delayed too much, he would just skip it.

It was great cycling—the wind was behind us, and Max set a really good pace. It wasn’t long before we turned off north for Dunnet Head (see map below).

The route and the diversion to Dunnet Head

There were quite a few of us at various points on the ride to and from Dunnet Head. As well as me and Max, there were Allison, Dan, Jack, Karen, Lisa, Michael and Father Paul, and also the Whippets, by now well ahead of us all (and there may have been others as well). It was unbelievably windy! As we cycled north, we all had to lean far to our left to avoid being blown off course and off our bikes completely. And the other way round as we returned.

But it was worth the effort, and in fact I found Dunnet Head more fulfilling, in some way or another, than getting to John O’Groats. The power of the wind, and the view, made everything seem very elemental. 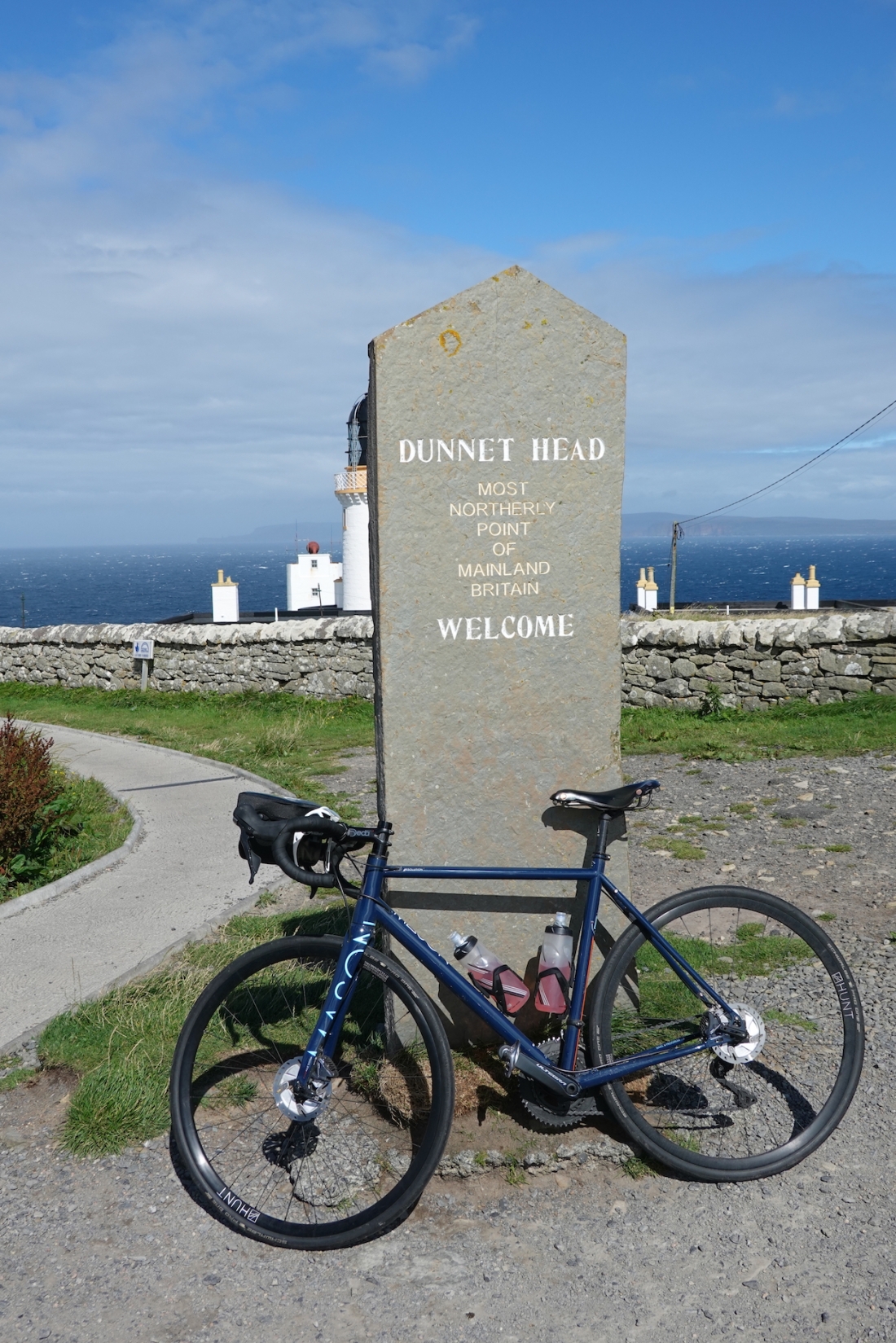 My bike at Dunnet Head

The lighthouse at Dunnet Head 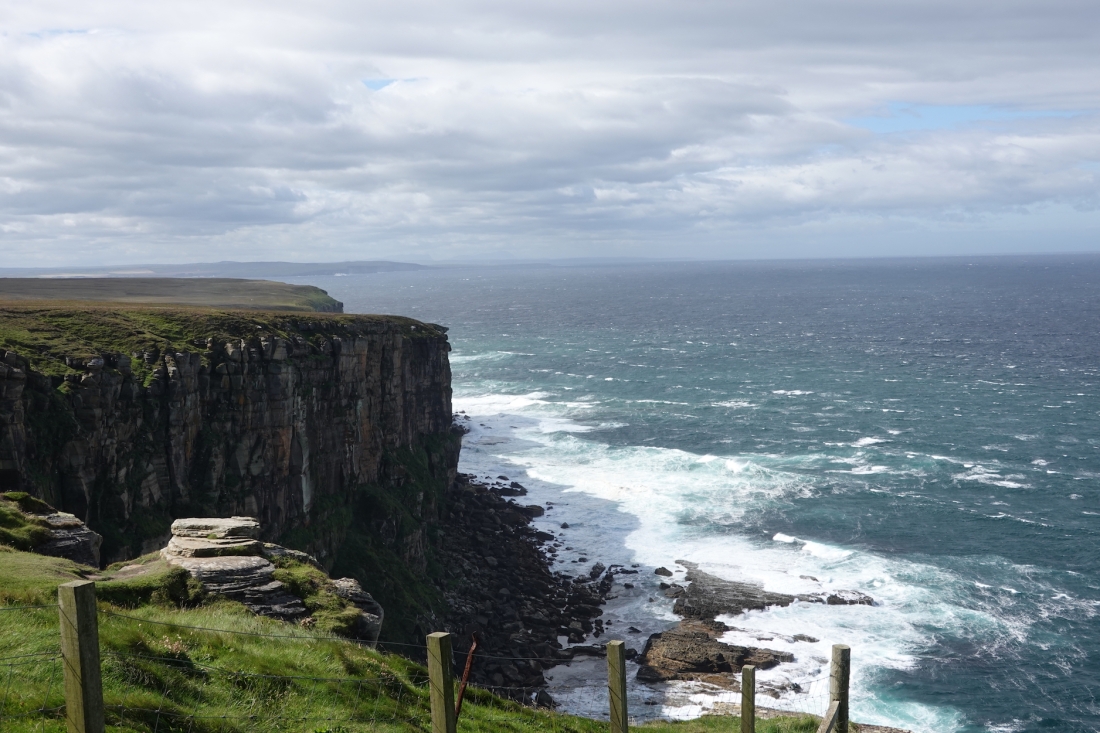 But enough of this romantic stuff. Having returned from Dunnet Head, and failed to find Andrew as arranged, it was full speed ahead for JOG, and I covered the remaining 10 miles or so in about 30 minutes, I think. On the way I passed Andrew, who wisely had been nursing his ailing rear wheel. I could see it oscillating quite dramatically as I approached him.

And then it was into John O’Groats. Photographs, congratulations, champagne, and more photographs.

We had coffee, and I took some photos of people who have not featured much in these blogs… 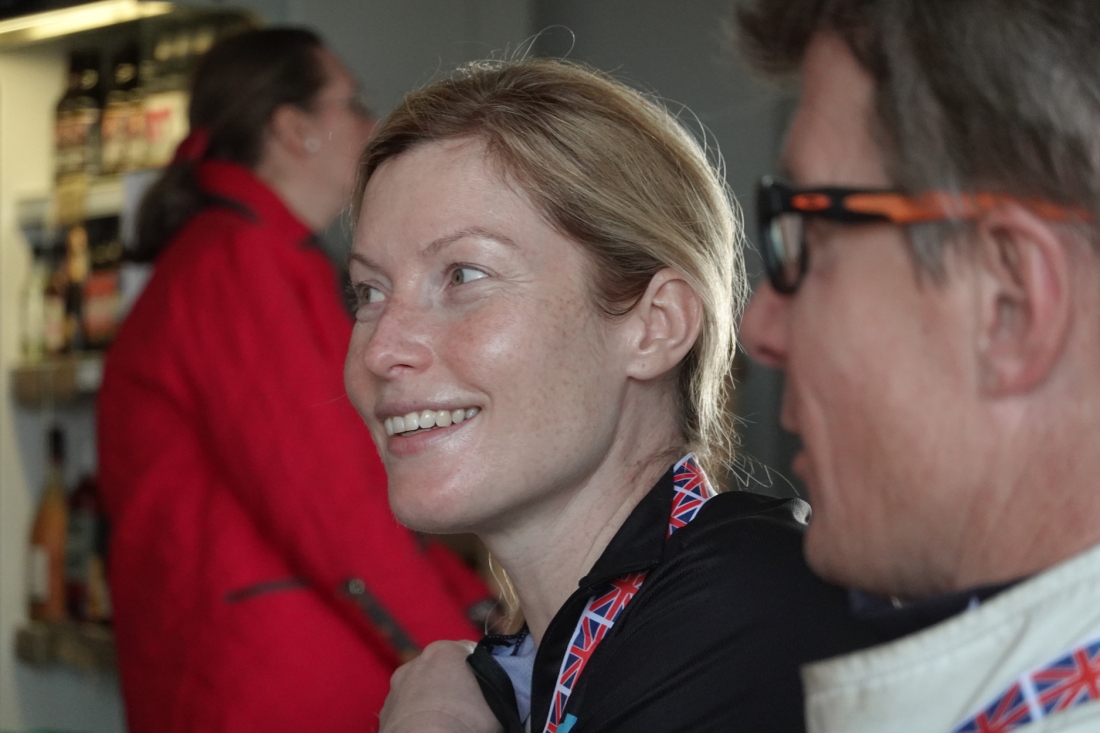 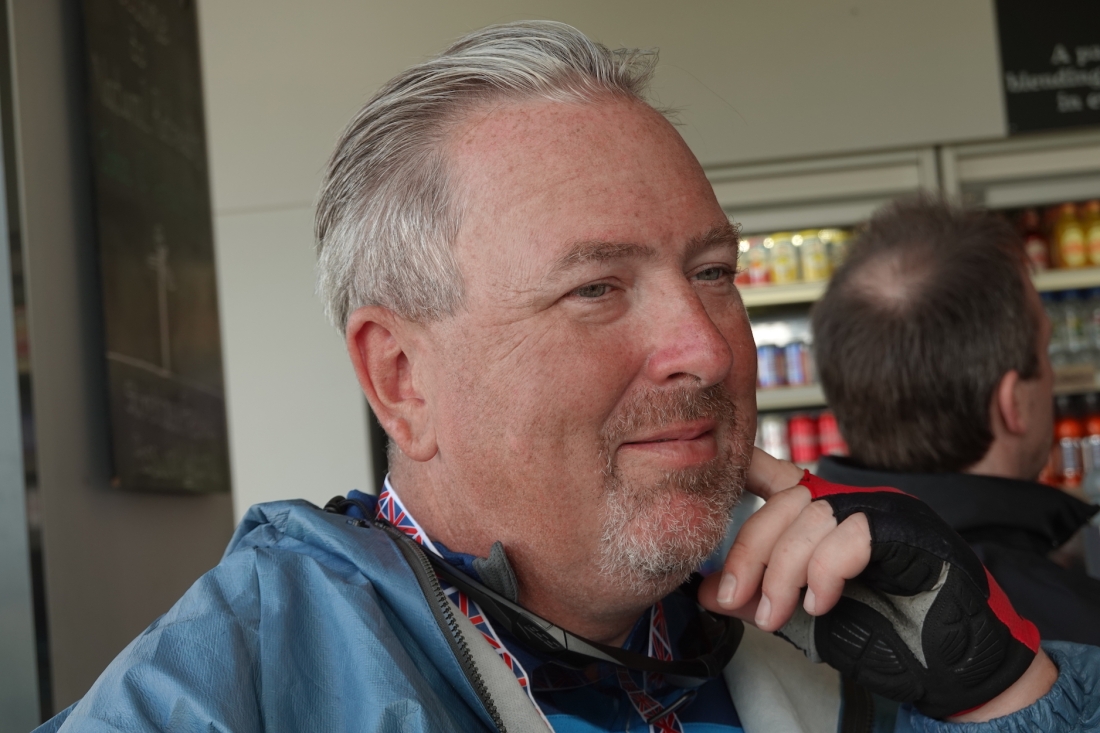 Jack, with Nigel behind

And roomies Allison and Lisa

No sooner had we finished than we cycled the 400 yards to the hotel that most of us were staying in. Our bike boxes were produced, and it was pedals, saddles and front wheels off before we squeezed our machines into their boxes. I managed to add a few more bits and bobs too, to make my other bags that little bit lighter for the journey home. Most of us were staying in the John O’Groats Hotel (apparently the only licenced premises in the whole of JOG) but Andrew, Max and I were in a guest house another half-mile away, and very nice it was too.

We met for dinner, we had a few more drinks, and we went to bed. I, for one, was very tired. 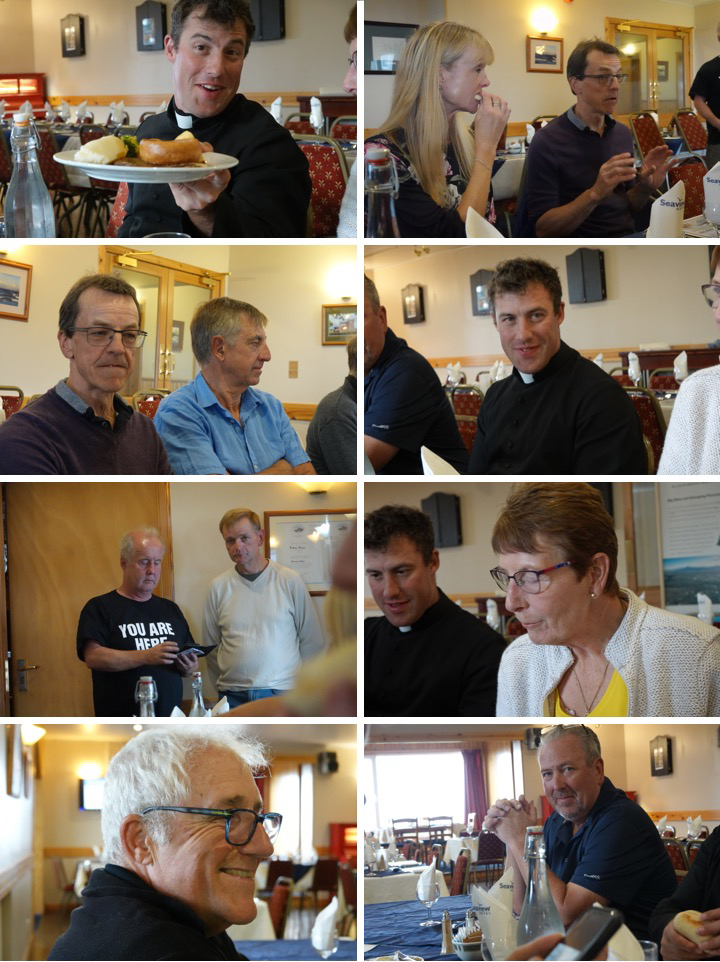 And this morning, Sunday, we set off for home!