When I’m cycling, or running, I sometimes sing to myself (this might be too much information, but for some reason singing does help me focus on the task at hand). At about 40 miles today (out of 80) there was a distinct smell in the air, and because I was singing Van Morrison’s Summertime in England (which, with its mention of Wordsworth and Coleridge, is actually about the Lake District and not Hereford and Worcester) I was instantly reminded of his song Redwood Tree, and the lines “And it smells like rain/Maybe even thunder”.

Sure enough, it started to rain, and I got a chance to try out my new Gore ONE 1985 Gore-Tex Shakedry jacket which, in spite of its name, is pretty good. But mostly I was reminded how sensitive our noses are to petrichor—the earthy odour produced when rain hits dry ground (or, because it wasn’t even raining when I first detected it, perhaps simply when the humidity is high). The word petrichor was coined in 1964 by Joy Bear and Richard Thomas. It comes from the Greek petros, meaning stone (from which the smell is derived), and ichor (referring to the blood of gods). I learned from Kathy Weston’s biography of David Hopwood that in fact the smell is that of geosmin, a chemical derived from the soil bacterium Streptomyces. Members of the family of bacteria to which Streptomyces belong are the source of most of the anti-microbial drugs we have today, so as Kathy says, not only do Streptomyces smell good, but they have saved millions of lives. With my Wellcome and biomedical researcher hats on, let us hope that worldwide efforts to solve antimicrobial resistance are successful.

I was singing another Van Morrison song later in the day, and this will provide the introduction to my thoughts on bicycle shorts at some point. Watch this space.

With 80 miles ahead of us, it seemed sensible to set off early, and Allison, Lisa and I formed our little breakaway group as we had done yesterday. I took a photo of the church next door to our guest house just before we left. It looked good in the morning light.

I should be honest and say that the trip today was long, but it wasn’t quite as challenging, dramatic or eventful as previous days. The Wye Valley was beautiful and verdant, but it was by no means as steep or relentless as implied by this download from my Wahoo data. (In contrast to most people on the trip I use a cycle computer made by Wahoo, not Garmin. The screen doesn’t look so fancy, but the battery life is better.) To use an expression borrowed from famous cycle commentators Phil Liggett and Paul Sherwen, I didn’t have to dig too deep into the suitcase of courage to finish this ride.

Perhaps because the trip was so uneventful there were fewer photo opportunities, but I liked this sign to Abergavenny because I always enjoyed going to Abergavenny with my school some 50 years ago.

Taking a trip up to Abergavenny/Hoping the weather is fine

However, we did have the chance to hang around a sign outside a shop in St Weonards that purported to show how far we had come and how far we had to go. All I can say is that we must be taking the long way round; our journey is a lot longer than 863 miles! You can see more photos from this stop on Allison’s Twitter feed.

We stopped for a snack by Madeley Parish Church (that’s my bike there), fuelled by snacks from the Spar grocery on the other side of the road…

We continued to see some great views, and we visited the fanciest dovecote I have ever seen… 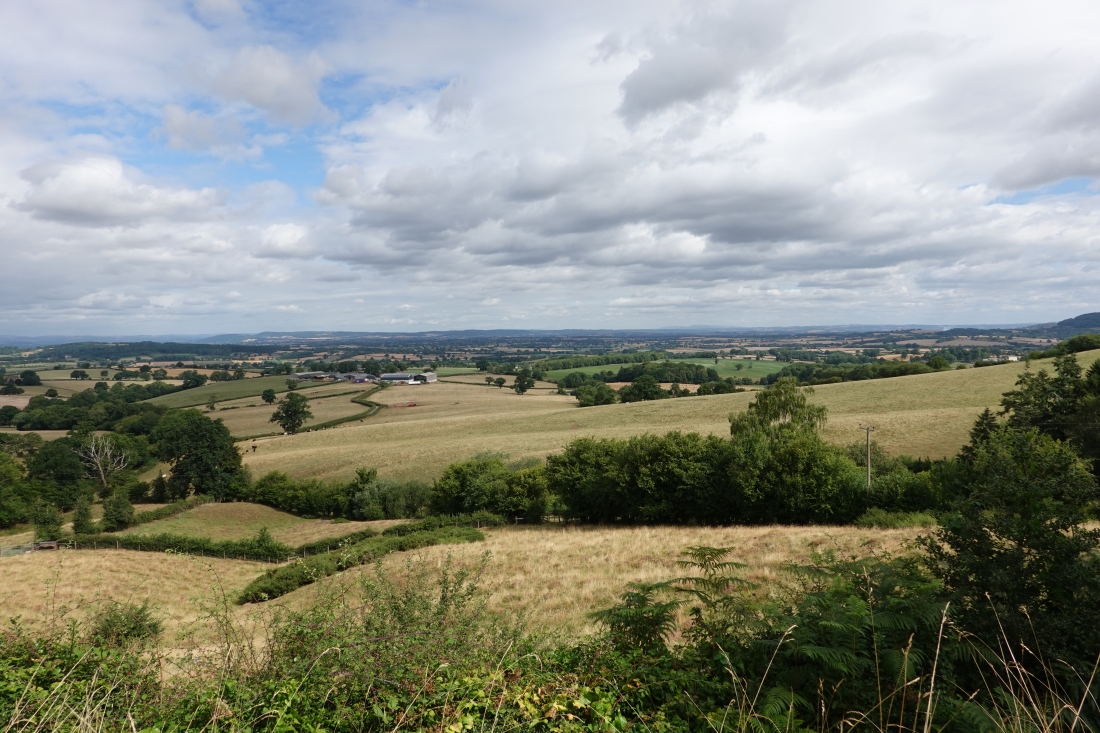 As usual, the day ended with dinner, and it was great to meet new friend Sally and to discover that for many of us on the trip the famous six degrees of separation can be reduced to just one or two. Father Paul, for example, studied with the son of the cellist Raphael Wallfisch, with whom I was at school and still see occasionally. I’m sure there will be more links to come.

And to finish, a map of our ride today…

And a map to put the trip so far into context…

Postscript: I’m late posting this because the hotel had no wifi—it may mean tomorrow’s post will be a bit shorter.